Archaeology provides incontrovertible proof of biblical scripture - thus serving as Testimony to the Word of God - one of the key elements of the Nazarene Code. The author coordinated the translation to Mandarin for the Asian market the discoveries of the amateur archaeologist and Sabbath-keeper Ron Wyatt's amazing finds that corroborate some of the Old Testament most amazing events.

Wyatt was a member of a Seventh Day Adventist church and a nurse-anesthetist in a hospital in Madison, Tennessee when in 1960, at the age of 27, he saw a picture in  Life Magazine of the Durupinar site, a boat-like shape on a mountain near Mount Ararat. The resulting widespread speculation in evangelical Christian circles that this might be Noah's Ark, started Wyatt on his career as an amateur archaeologist. From 1977 until his death in 1999 he made over one hundred trips to the Middle East, his interests widening to take in a wide variety of references from the Old and New Testaments.  The list of his many discoveries are noted below to the left.

Not surprisingly, Ron Wyatt has his share of skeptics, and while there may be some dispute over a couple of his findings, it is ridiculous to dismiss the entire body of his work over them since his findings match identically to the biblical accounts. The sheer fact that he, being a very righteous man who never made any efforts to profit from his discoveries and in fact sacrificed all his possessions and earnings to prove the historicity of God's works proved to me that he was specifically chosen by God to reveal them to the world.  He, more than any one I have ever known, made me a firm believer of the bible accounts of the Old Testament.  For that reason, I am eternally grateful to this man and honored to showcase his finds and be a part of his efforts to touch the lives of others to the reality of the Father's existence which I did by helping to broker the Chinese translation of his videos for the Asian market. An invitation to the author to explore for the lost Ark of the Covenant later arose from Richard Rives, the Director of the Wyatt Museum.

JERUSALEM –  Israeli archaeologists have discovered a 2,700-year-old seal that bears the inscription "Bethlehem," the Israel Antiquities Authority announced Wednesday, in what experts believe to be the oldest artifact with the name of Jesus' traditional birthplace.The tiny clay seal's existence and age provide vivid evidence that Bethlehem was not just the name of a fabled biblical town, but also a bustling place of trade linked to the nearby city of Jerusalem, archaeologists said.

Eli Shukron, the authority's director of excavations, said the find was significant because it is the first time the name "Bethlehem" appears outside of a biblical text from that period.

In this photo made available, Wednesday, May 22, 2012 by Israel's Antiquities Authority, shows a detail of a seal bearing the name "Bethlehem" in ancient Hebrew script. (AP Photo/Clara Amit, courtesy of the Israel Antiquities Authority)
Shukron said the seal, 1.5 centimeters (0.59 inches) in diameter, dates back to the period of the first biblical Jewish Temple, between the eighth and seventh century B.C., at a time when Jewish kings reigned over the ancient kingdom of Judah and 700 years before Jesus was born. The seal was written in ancient Hebrew script from the same time. Pottery found nearby also dated back to the same period, he said.

Shmuel Achituv, an expert in ancient scripts at Israel's Ben-Gurion University who did not participate in the dig, said the discovery was the oldest reference to Bethlehem ever found outside of the Bible. Apart from the seal, the other mentions of Bethlehem, Achituv said, "are only in the Bible."

The stamp, also known as "fiscal bulla," was likely used to seal an administrative tax document, sent from Bethlehem to Jerusalem, the seat of Jewish power at the time.

It was found as archaeologists sifted through mounds of dirt they had dug up in an excavation outside Jerusalem's Old City walls.

Shukron said the first line most likely read "Beshava'at" -- or "in the seventh" -- most likely the year of the reign of a king. The second line, he said, has the crumbling letters of the word "Bethlehem." The third line carried one letter, a "ch" which Shukron said was the last letter of the Hebrew work for king, "melech."

Hebrew words often do not have vowels, which are understood from the context, making several interpretations of the same word plausible. Some of the letters are crumbled, or were wiped away. Three experts interviewed by the AP, one involved in the text and two independents, concurred the seal says Bethlehem.

There are only some 40 other existing seals of this kind from the first Jewish Temple period, said Achituv, making this a significant find, both because such seals are rare, and because this is the first to mention Bethlehem.

The dig itself has raised controversy.

It is being underwritten by an extreme-right wing Jewish organization that seeks to populate the crowded Palestinian neighborhood of Silwan with Jewish settlers, arguing that they have ancient links to the area. The dig is being undertaken in a national park in the area of Silwan, known to Jews as "the City of David."

Shukron said the seal was found some months ago, but they needed time to confirm the identity of the artifact. 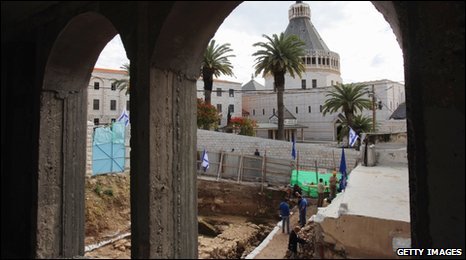 Archaeologists in Israel say they have uncovered the remains of the first dwelling in Nazareth believed to date back to the time of Jesus Christ.

The discovery sheds light on how people lived 2,000 years ago, when Christians believe Jesus was growing up there, Israel's Antiquities Authority said.

A spokeswoman said Jesus and his childhood friends likely knew the home.

It was found near the place where angel Gabriel is believed to have told Mary that she would give birth to Jesus.

The archaeologists found the remains of a wall, a hideout, and a cistern for collecting rain water. The building that we found is small and modest and it is most likely typical of the dwellings in Nazareth in that period," said Yardenna Alexandre of the Antiquities Authority, who directed the dig.

She said the 1st Century home, near the present-day Church of the Annunciation, is believed to have housed a "simple Jewish family" in two rooms and courtyard.

She described Nazareth, now Israel's largest Arab city with a population of 65,000 people, as a "small hamlet" during the time of Jesus.

The discovery was made when builders dug up the courtyard of a former convent to make room for a new Christian centre.

The dwelling will now become a part of the new centre, which is being built by the French Roman Catholic group, Chemin Neuf.
Source: http://news.bbc.co.uk/2/hi/8425094.stm