The 14 Nazarene Code Scriptures in the New Testament

Now as you read Matthew 7:21-23 below, the 1st of 14 such Nazarene Code scriptures in the New Testament you will clearly understand PRECISELY what the Messiah is saying:

1 Matthew 7:21
21"Not everyone who says to Me, 'Lord, Lord,' will enter the kingdom of heaven, but he who does (LAW/TORAH) the will of My Father who is in heaven will enter. 22"Many will say to Me on that day, 'Lord, Lord, did we not (2) prophesy in Your name, and in Your name cast out demons, and in Your name perform many miracles?' (TESTIMONY) 23"And then I will declare to them, 'I never knew you; DEPART FROM ME, YOU WHO PRACTICE LAWLESSNESS". (LAWLESSNESS means not keeping God's LAW/TORAH)

Do you now see a clarity to the message the Messiah is clearly pointing out? Quite frankly He is telling you that those who do not practice the Father’s Will – i.e., practice “lawlessness” – will be rebuked from entering the kingdom of heaven.

Likewise, the above scripture is clearly telling us WE ARE NOT SAVED BY FAITH IN CHRIST ALONE.

It is as straightforward as can be on these two points. All religions which preach against the practice of the Father's Law and being saved by faith in Christ alone will be rebuked from the gates of heaven according to the Messiah Himself.  Not convinced? Read further...


Matthew 7:21-23 is only one of 14 such Nazarene Code scriptures found in the New Testament. The other 13 that unquestionably indicate that we have faith in the Messiah AND keep the word (Torah) of the Father are below:

2 Matthew 13:52
He said to them, "Therefore every teacher (gives TESTIMONY) of the LAW (TORAH) who has become a disciple of the kingdom of heaven  is like the owner of a house who brings out of his storeroom new treasures (TESTIMONY OF THE MESSIAH) as well as old.(treasures)" (LAW/TORAH)

Editor's Note: The Messiah is telling us with the above scripture THREE very important things: 1st:The Law is the old treasure and a conditional requirement to become a disciple of heaven, 2nd: the new treasures are the testimony that He is the Son of the living God and 3rd: Those who teach and preach (i.e., given Testimony) of the Law (Torah) becomes a disciple of the kingdom of heaven.

3 John 4:23
23"But an hour is coming, and now is, when the true worshipers will worship the Father in spirit and truth (LAW/TORAH); for such people the Father seeks to be His worshipers. 24"God is spirit, and those who worship Him must worship in spirit and truth." 25The woman said to Him, "I know that Messiah is coming (He who is called Christ); when that One comes, He will declare all things to us. 26Jesus said to her, "I who speak to you am He." (TESTIMONY)

4 John 14:12-15
““Timeless truth, I tell you: 'whoever believes in me, (TESTIMONY) those works (LAW/TORAH) which I have done he will also do , and he will do greater works than these, because I am going to the presence of my Father. And anything that you will ask in my name I shall do for you, that The Father may be glorified in His Son.”(TESTIMONY) “And if you will ask me in my name (TESTIMONY), I shall do this. If you love me, keep my commandments.” (LAW/TORAH)

He who has my commandments (LAW/TORAH) and keeps them, it is he who loves Me. And he who loves Me will be loved by My Father, and I will love him and manifest Myself to him (TESTIMONY).

6 John 14:23
“If anyone loves Me (TESTIMONY), he will keep My word; (LAW/TORAH) and My Father will love him, and We will come to him and make him Our home with him.

7 John 17:3-6
“But these things are eternal life: 'They shall know you, for you alone are The God of Truth, and The Messiah whom you have sent (TESTIMONY) I have glorified you in the earth; I have accomplished the work that you have given me to do. Now, glorify me, my Father, in union with yourself, in that glory which I had in union with you before the universe was. I have revealed your Name to the children of men, those whom you have given me from the world; yours they were, and you have given them to me, and they have kept your word.”(LAW/TORAH).

8 Acts 24:14
“And yet I confess this, I'm a follower of The Way [ of the Messiah ] (TESTIMONY), which they call a sect. This means that I serve our ancestors' God and believe everything written in Moses' Teachings and the Prophets".
(LAW/TORAH)

Editor's Note: Under threat of death, Paul admitted the above which the Nazarenes followed - faith that the Messiah is the Son of the living God and keeping the Mosaic Law, however, he would later teach a false gospel claiming the Law was a curse and spurned the Father's and Messiah's commandments.

Take note below how James, the brother of the Messiah, reiterates THE SAME PRECISE MESSAGE expressed by the Son of God in Matthew 7:21-23  (# 3 Nazarene Code scripture cited above):

14  James 2:26
"Just as the body without the spirit is dead, so also faith (TESTIMONY) without works (LAW/TORAH) is dead."

Ultimately, one must decide whether to believe the Word of God the Father, His Son the Messiah, the 12 Apostles and the brother of the Messiah, James, or that of the Pharisee, heretic and fraud, Paul to enter the Kingdom of Heaven.

(a) ARE THE COMMANDMENTS OF THE FATHER (I.E., THE LAW) KEPT?

(b) IS THE TESTIMONY OF THE MESSIAH KEPT?

(c) IS MESSAGE DELIVERED TO THE CHILDREN OF THE HOUSE OF ISRAEL?
(a) YES - THE MESSIAH TELLS HIS  DISCIPLES TO KEEP THE FATHER'S & HIS COMMANDMENTS (LAW / TORAH).

(b) YES - THE NT IS PRIMARILY ABOUT THE TESTIMONY/FAITH IN THE MESSIAH.

(c) YES - THE MESSIAH PREACHES HIS GOSPEL OF THE KINGDOM TO 2 OF THE 12 TRIBES OF ISRAEL WHILE IN JUDAEA.
... I must preach the Good News of the Kingdom of God to the other cities also, for I was sent for this purpose."
Luke 4:43
"...I was sent only to the lost sheep of the house of Israel."
Matthew 15:24 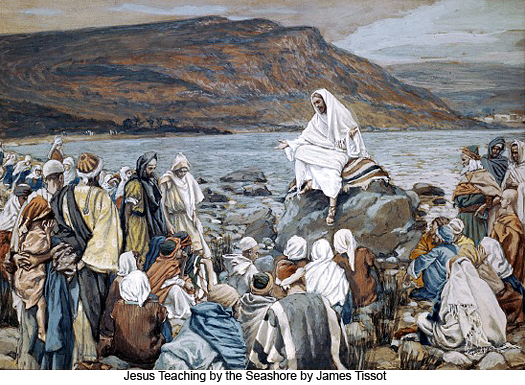